Phyllis Rippey, University of Ottawa, opened the session with her talk on impostor syndrome. Surprisingly, she talked about an upside to impostor syndrome: those who experience it are less likely to cheat on exams. However, the cons outweigh the benefits since the persistent feeling that one’s successes are undeserved can be detrimental to self-confidence and taking career risks.

“I was just in the right place at the right time.”

These seemingly harmless remarks appear all too frequently, but they represent a pattern of explaining away accomplishments. Rippey wanted us to know that we’re not alone when we feel this way. Reaching out to others and getting help is a good thing. She says, “Confidence isn’t about knowing everything, it’s about knowing how to use the resources to get the job done.” Rippey talked about how focusing on learning and improvement instead of knowing everything and being perfect helped overcome pressure in her career. The room was silent and attentive when she announced, “The goal should be to be good enough most of the time.” She recommended keeping an accomplishment inventory, so we can remember our successes, even in times when it feels impossible. 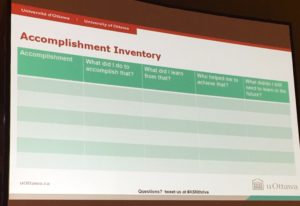 The next speaker was Ellen Fung, UCSF Benioff Children’s Hospital, who spoke about the secrets to getting great mentorship. She taught us that mentorship has four basic topic areas: 1) professional development; 2) scientific method/project input development; 3) emotional support/community/accountability; and 4) networking. Fung recommended seeking out a mentor, who is not only knowledgeable and passionate about the specific field you’re interested in, but also interested in being a mentor. Most importantly, a mentor should be someone who you are able to communicate well with, since the mentor/mentee relationship thrives off of mutual respect and trust. Mentees drive this relationship, so it’s important to know yourself and your goals before approaching a new mentor. Fung also warned us of common ways mentees damage this mentorship relationship, such as by not providing the mentor with a plan, disrespect, disregarding all advice, and not using your mentor’s time wisely. She concluded her talk by sharing, “You will have a variety of mentors, some good, some bad, and you will learn something from them all.”

Michelle Braun, DuPont Nutrition and Health, took the podium next to share tips for successful networking. She revealed that most people perceive networking as an event with barriers. However, she recommends on planning to be uncomfortable, preparing for the worst, not automatically saying “no,” and giving yourself time to recover after the event (i.e. unwind with a hot cup of tea and a good book). Networking is an exchange of information, where you learn about the other person and share about yourself. Her simple steps to make networking an enjoyable experience are:

Braun shared her secret tips for meeting someone new: simply sit somewhere new, make eye contact with others, and be open to interactions. The room almost became a giant game of musical chairs, as attendees smiled and looked around the room. We were then given a break to practice networking and the room was filled with chatter, laughter, and positive energy.

Christina Sherry, Abbott Nutrition, was the next speaker and spoke about the transition from mentee to mentor. She recommends taking the time to listen to your colleagues about challenges they may face and sharing your own experiences if you have been in similar circumstances. Your colleagues may pinpoint you as a problem solver. However, it’s important to respect confidentiality in this circumstance. You can also tell a relatable story about what you did that may or may not have worked. Sherry recommends sticking to a neutral tone to come across as more objective, rather than preachy. She suggests getting involved in organizational activities to help develop your skills and meet others. Sherry voiced that we are moving into a more collaborative scientific world, so don’t let titles hold you back since we can all learn from each other. Sherry has found that being transparent and vulnerable helped open doors for better communication.

Barbara Schneeman, University of California, Davis, then talked about team management and leadership. She revealed that the difference between the two roles comes down to a shift in perspective. As a team participant, you focus on what resources are available to support you and whether you have access to mentors. As a team leader, you focus on balancing the competing demands on time and achieving success for each team member, as well as the team as a whole. As a leader, you have to motivate and communicate with each team member amidst differing personalities. Schneeman pinpoints that responsiveness is important to a team. Leaders must know how to assess a situation, problem solve, and respond, while also motivating and inspiring team members to problem solve on their own. She recommends strategic planning, such as conducting a SWOT analysis or planning framework. Schneeman revealed five competencies associated with leadership that she recommends working on: 1) dealing with ambiguity; 2) active listening; 3) negotiating; 4) being politically savvy; and 5) priority setting. She ended with a quote from Peter Drucker, “Management is doing things right; leadership is doing the right things.”

The last speaker was Shelly McGuire, Washington State University, who spoke about a topic near and dear to graduate students and those in the workforce alike: prioritizing your time and learning to say “no.” In fact, McGuire turned it around and told us that learning to say “yes” is way more important than learning to say “no.” McGuire shared the wisdom she learned over the years from being a career woman and raising a family: you have to put in energy (i.e. effort) to avoid the crazy. She revealed that successful people put the time and energy into the values and roles that are important to them, rather than the things that they don’t value or roles with no meaning. Oftentimes when you don’t feel happy, it’s because you’re not honoring your values. She encouraged us to think about our core values. Once we identify these, we can then put a plan in place to uphold our values. McGuire then turned the conversation to effectiveness versus efficiency. Effectiveness is the degree to which your objectives are achieved, whereas efficiency is doing something well with the least amount of effort/time–these are not the same thing! She prompted us to consider the following the next time we are asked to do something:

The wisdom and advice shared throughout the symposium appeared to motivate the audience to go out there, put away the impostor syndrome, and be successful.

Debbie Fetter is a Doctoral Candidate in the Graduate Group in Nutritional Biology at the University of California, Davis. She works in the Zidenberg-Cherr research group where her research focuses on how to use technology in school-based, obesity-prevention programs to generate interest towards nutrition and physical activity. She is currently using wearable activity devices as a platform for encouraging students to adopt healthy behaviors through targeted health messages. Debbie enjoys writing and aspires to use her writing to help bridge the gap between the science community and the general public. Hearing misconceptions about nutrition motivated her to create her own blog and Instagram to discuss current nutrition trends, research, and sustainable strategies towards incorporating healthy living. Debbie also holds a BS in Nutrition Science from the University of California, Davis. In the midst of graduate school life, she finds time to run and take group exercise classes. She is an advocate for “variety in moderation” and believes that in a healthy diet there’s always room for a piece of cheese.

With the rise in technology, information is at our fingertips–literally. Concurrent with the technology boom, more and more people are

Walking into the “Developing Healthy Eating and Physical Activity Behaviors through Education, Extension or Technology” session sponsored by the ASN