Sunday morning at ASN’s 2017 Scientific Sessions and Annual Meeting began with the “Nutrigenomics and Personalized Nutrition” session hosted by the ASN Nutrient-Gene Interactions RIS. The presentations that followed addressed aspects of the question: how do genes and nutrition interact?

Silvia Berciano, Tufts University, opened the session with her presentation on “Behavior related genes, dietary preferences and anthropometric traits.” She explored how genes involved in behavioral and psychological traits influence dietary habits, which then subsequently affect physical traits. Data was used from the Genetics and Lipid Lowering Drugs and Diet Network (GOLDN) Study to investigate how behavioral candidate genes, food preferences, and anthropometric traits interacted. Her study found multiple genes were associated with various dietary components, such as chocolate intake was linked to a variation at the OXTR locus, which was associated with waist circumference. Her results support that mapping genes could lead to a better understanding of how to personalize nutrition.

Krittikan Chanpaisaeng, Purdue University, next presented on “Femoral and L5 Spine Trabecular Bone Are Differentially Influenced by Dietary Calcium Restriction and Genetics in Growing Mice.” Her study explored site-specific effects of dietary calcium intake on the trabecular bone mass in the right femur and L5 vertebrae using genetically distinct mouse lines randomized to receive adequate or low-calcium intake. She found the low-calcium intake had a negative effect on trabecular bone mass, but this was especially seen on the structural integrity of the femoral, as compared to L5 vertebrae. This suggests the low-calcium intake has a differential effect on trabecular bone mass. Further, there was large phenotypic diversity among the mouse population for all femur and spine parameters, which shows genetics may be a major regulator of trabecular bone mass. These findings demonstrate that genetic mapping can help classify sites that could be more susceptible to bone loss. This information could be used to identify those that may then be more vulnerable to osteoporosis.

From the same research group, James Fleet, (below image) Purdue University, shared his talk, “Multi-Trait Genetic Mapping Reveals Novel Loci Responsible for Genetic and Genetic-by-Diet Interactions Affecting Bone, Vitamin D, and Calcium Metabolism.” Fleet used multi-trait analysis to examine interactions between bone mass, calcium, and vitamin D phenotypes. He used Principle Components Analysis to look for patterns and relationships between phenotypes. This approach found loci not identifiable on a single-trait map, which can be employed to establish a framework for understanding how genetic variation can interact with calcium intake to affect the development for components of bone mass. 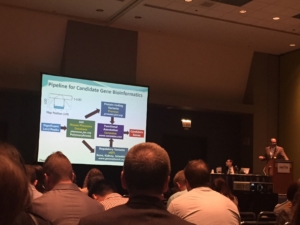 Maxwell Barffour, (below image) University of California Davis, then presented his findings on “Hemoglobinopathies and Child Feeding Practices as Predictors of Anemia in Rural Laotian Children: Evidence from the Lao Zinc Study.” Anemia tends to peak around complementary feeding due to inadequate feeding practices. He examined how Hemoglobin E-trait (HbE), a common structural hemoglobin variant in Southeast Asia, was associated with risk for anemia. Children, aged 6-23 months from the Lao Zinc randomized controlled trial, were genetically mapped to see if they had the normal trait (HbAA), were heterozygote (HbEA), or homozygote (HbEE). Feeding practices were assessed using a 24-hr dietary recall administered to the parents. His study found homozygotes had more than triple the risk for anemia and heterozygotes had a 40% greater risk for anemia. His findings support that among breastfed children, consumption of iron-rich foods and especially food diversification, may reduce anemia risk in this population. 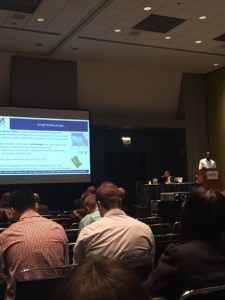 Riva Sorkin, University of Toronto, examined how salivary amylase may influence consumption of a high starch diet in her presentation, “Genetic variation in the AMY1 gene is associated with dietary carbohydrate and starch intake in a young adult population.” Salivary amylase is encoded by the AMY1 gene, which has high copy number variation, meaning that large regions of the genome are duplicated or deleted on chromosomes. Single nucleotide polymorphisms by the amylase genes have been shown to be associated with AMY1 copy number. Sorkin used data from an ethno-culturally diverse population from the Toronto Nutrigenomics and Health Study and genotyped the participants for AMY1 single nucleotide polymorphisms. Participants also completed questionnaires about their health, lifestyle, and physical activity. She found that polymorphisms in the AMY1 gene were linked to dietary intake patterns, such as carriers for the minor allele in rs1999478 in East Asians had significantly higher total energy and sugar intakes. Her study suggests there are unknown mechanisms, including genetic polymorphisms, that affect satiety and appetite regulation that should continue to be explored.

M. Elizabeth Tejero, INMEGEN, discussed how response to a fish oil supplementation trial in Mexicans (aged 18-40 years) was influenced by genetics during her talk on “Differences in the transcriptome of responders and non-responders on glucose metabolism markers after fish oil supplementation.” Participants were given fish oil pills (DHA and EPA) for 6 weeks. Participants with the largest reduction or increase in fasting insulin were then pair-matched by age, sex, change in omega-3 index, and BMI. Between these two groups, there was no difference in gene expression before the study. However, after the trial there were changes in genes related to inflammatory response and glucose metabolism. Participants with the largest reduction in fasting insulin exhibited more changes in these genes, as compared to participants with the largest increase in fasting insulin. Her findings support that dietary intake can influence gene expression.

Next, Tolunay Aydemir, (below image) University of Florida, presented her talk, “Zip14-Mediated Zinc Transport Contributes to Regulation of Glucose Homeostasis in Intestine, Pancreas and Liver.” Her study used a ZIP14 knockout mouse model to support findings that ZIP14 is vital for regulating signaling events for glucose homeostasis and inflammation. The knockout mice were found to have impaired zinc-dependent insulin degrading proteases, insulin degrading enzyme, and cathepsin D, which increased the activity of the insulin receptor. These mice also displayed greater hepatic glycogen synthesis and impaired gluconeogenesis and glycolysis linked to reduced cytosolic zinc levels. Her study showed that ZIP14-mediated zinc transport is related to intestinal barrier function, biosynthesis and secretion of insulin, insulin receptor activity, and glucose homeostasis in the liver. This suggests ZIP14 could be a new target for treating diabetes and other glucose-related disorders. 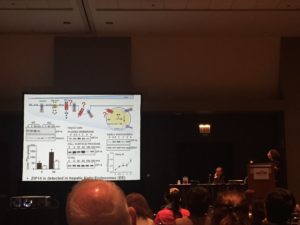 Qiaozhu Su, (below image) University of Nebraska-Lincoln, ended the session with her presentation on “MicroRNAs in the Pathogenesis of Lipogenic Diet Induced Hyperlipidemia and Insulin Resistance.” Her study investigated how micro RNAs could regulate the development of hyperlipidemia and insulin resistance induced by a high-fructose diet. Illumina small RNA sequencing was used to identify micro RNAs that were altered in response to a high-fructose diet in mouse livers. Su found that genetic depletion of one type of micro RNA protected the mice from fructose-induced insulin resistance, while overexpression of another type of micro RNA led to inflammatory stress in the liver. These findings suggest there may be potential to manipulate these micro RNAs to prevent the development of high-fructose diet induced hyperlipidemia and insulin resistance. 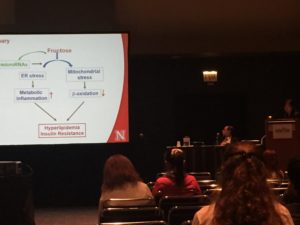 Debbie Fetter is a Doctoral Candidate in the Graduate Group in Nutritional Biology at the University of California, Davis. She works in the Zidenberg-Cherr research group where her research focuses on how to use technology in school-based, obesity-prevention programs to generate interest towards nutrition and physical activity. She is currently using wearable activity devices as a platform for encouraging students to adopt healthy behaviors through targeted health messages. Debbie enjoys writing and aspires to use her writing to help bridge the gap between the science community and the general public. Hearing misconceptions about nutrition motivated her to create her own blog and Instagram to discuss current nutrition trends, research, and sustainable strategies towards incorporating healthy living. Debbie also holds a BS in Nutrition Science from the University of California, Davis. In the midst of graduate school life, she finds time to run and take group exercise classes. She is an advocate for “variety in moderation” and believes that in a healthy diet there’s always room for a piece of cheese.

Some of the impacts of vitamin E deficiency include neurodegeneration, demyelination and ataxia, indicating that vitamin E is critical in

What role does nutrition play on vascular dementia?