The other day I was sitting in class and the professor showed us a music video that compared sugar to drugs, which really got me thinking about the types of nutrition messaging. There are many campaigns out there targeting nutrition-related areas for change, particularly in the childhood obesity arena. However, many of these campaigns use bold images and scare-tactics to convey the message. Is this the approach we should be taking to create a healthier change?

The obesity epidemic has sparked an urgent need for preventative action. The Institute of Medicine released a report in 2012, Accelerating Progress in Obesity Prevention: Solving the Weight of the Nation, which expressed the need for transformative approaches to changing the environment, especially for “messaging environments.” Due to the increased use of social marketing, product marketing and labeling, and public media campaigns, the potential for utilizing communication in the prevention of obesity is great (1). There have been many campaigns floating around the media in the past decade. A memorable one was Strong4Life, which was created in 2011 by Children’s HealthCare of Atlanta, a leading pediatric hospital. This initiative used “in-your-face advertising” to aggressively fight Georgia’s childhood obesity problem (1). The initial advertisements featured somber children describing their struggles with obesity (1). 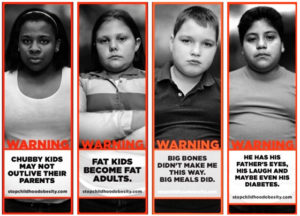 These advertisements generated concern among public health experts due to the fear that the portrayals of overweight children could intensify the weight-based stigma (1). This type of message emphasized the negative health and social consequences of obesity. Health communications can be framed to emphasize either the benefits of participating in a type of behavior (a gain-frame), or the consequences of not participating in a type of behavior (a loss-frame) (2). There is evidence that suggests non-stereotypical, positive media portrayals of obese and overweight individuals can effectively decrease weight-based stigma, while negative portrayals may even worsen the stigma (3). Further, gain-framed communications seem to be more effective than loss-framed communications in endorsing prevention behaviors (2). When the message is framed to stimulate core values, the persuasion factor increases, since the person is more likely to pay attention and accept the message (4).

Campaigns should highlight information that is new to the desired audience and necessary for behavior change (5). It would be useful for health communications to incorporate the “how to” and “when to” knowledge in order to support behavior change (5). Also, misconceptions about the issue may need to be addressed, along with other real and perceived barriers to behavior change (5). Ideally, before public release, communication strategies should be evaluated to determine how effective they would be in supporting the target outcome and without exacerbating any sort of stigma (1). As the use of technology continues to increase, there certainly will be no shortage of health campaigns. Hopefully, the messages will be effective in inspiring positive health changes without creating negative stigma or fear.