Here we go again. I’m reading the billionth newspaper article referring to the “French paradox,” with the author explaining that “in spite of their high saturated fat intake, the French die less of coronary heart disease thanks to their higher consumption of red wine.”

It’s an old story that keeps coming back. I’ve heard it time and again from TV shows, newspapers, books and magazines, even university professors. It has been told so many times that in the back of their minds a lot of people still believe the concept that drinking red wine can prevent cardiovascular disease. It all dates back to the early nineties, when Serge Renaud and Michel De Lorgeril published a paper in Lancet entitled “Wine, alcohol, platelets, and the French paradox for coronary heart disease” (1).

Presenting epidemiological data, the authors observed that French people had a high consumption of saturated fat, and yet their mortality for coronary heart disease (CHD) was low. In the US and the UK, where consumption of saturated fat was substantially equivalent to France, mortality for CHD was much higher. They called this the “French paradox.” There was, however, a difference; in France, they would also drink more red wine. Since alcohol does have some fibrinolitic and atheroprotective effects, and red wine contains some protective polyphenols, such as resveratrols that come straight from red grapes, they hypothesized that higher red wine consumption could explain the apparent paradox. To further support this hypothesis, there were some striking data from three different cities within France itself. CHD mortality per 100,000 men was much lower in Toulouse compared to Strasbourg and Lille (78 vs 102 and 105, respectively), in spite of cheese consumption being higher (51 g/day vs 34 and 42 g/day, respectively). However, wine consumption in Toulouse was also significantly higher compared to the other two cities (383 g/day vs. 286 and 267 g/day, respectively). Again, wine consumption appeared to “counteract the untoward effects of saturated fats,” to use the words of the authors.

In the 1990s, wine sales in Europe were inexorably declining, with many young people in traditionally wine-drinking countries steadily switching to beer, considering wine drinking an old-fashioned habit. The wine industry jumped on the “French paradox” story, promoting an epic marketing campaign which instilled in a lot of people the idea that drinking red wine is good for your heart. It was so effective that I know people who didn’t drink alcohol at all, and started drinking a glass of red with their meals for fear that not doing so would increase their risk of dropping dead from a heart attack.

Not surprisingly, a great deal of research ensued. Indeed, when polyphenols are extracted from red grapes or red wine they exert beneficial effects, but the amount of wine needed to get enough resveratrols to produce a significant effect would be incompatible with the toxic effects of alcohol (2,3). And while a moderate consumption of alcohol is associated with a slightly reduced death rate from heart attack, it is also associated with a slightly increased death rate from cancer, liver cirrhosis and car accidents (4,5). Tough choice.

Anyone who has visited France will notice they enjoy their cheeses and sauces and foie gras, they always eat them with plenty of vegetables and grains, and a visit to any morning market in France will strike for the abundance of colors coming from all sorts of fruits, vegetables and herbs, and for the customers eagerly filling their baskets with them. So, was it really wine that was the key to explain the French paradox? A mere look at the rest of the Toulouse-Strasbourg-Lille table published in that very Lancet article would have provided good clues that wine was not necessarily part of the answer, and even if it was, it was certainly not all of it! 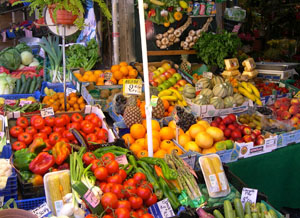 Granted, in Toulouse they drank more red wine than in Strasbourg and Lille, while eating slightly more cheese, but they also ate a lot more vegetables (306 g/day vs. 217 and 212 g/day, respectively), a lot more fruit (238 g/day vs. 149 and 160 g/day), half the butter (13 g/day vs. 22 and 20 g/day), more vegetable fat (20 g/day vs. 16 and 15 g/day) and more bread (225 g/day vs. 164 and 152 g/day). In other words, they were eating more fruits and vegetables and they ingested more dietary fiber, less saturated fat, more polyunsaturated fat and more grains. Still surprised that their deaths were less often attributed to cardiovascular disease?

The popular narrative of the French paradox gets the premise and the conclusion wrong. It is wrong to assume that saturated fat is all that matters to predict cardiovascular risk, since we know very well that it is just one of the many dietary factors involved. And it is dead wrong to suggest that drinking a few glasses of red wine is all you need to make it better. If anything, the whole story proves once more the concept that the balance of diet in general is more important than any single component in preventing disease and ensuring good health. You can eat a little bit more cheese, but if you eat a lot more fruits and vegetables, you are still doing fine. I propose a toast to this basic rule of nutrition, and I’ll be happy to toast with a glass of good French red wine, as they do in Toulouse. But just like them, I’ll get plenty of fruits and veggies afterwards to prevent CHD. Cheers!

Why Nutrition in School Age Children Is Important, and Even More Important as a Consequence of the COVID-19 Epidemic?

Middle childhood, the period between 5 to 9 years of age, has historically been and remains a neglected age group

“Eat Right, Bite by Bite” March is National Nutrition Month®, the Academy of Nutrition and Dietetics celebrates this annually. As