Coconut water has long been the drink of choice for cooling parched throats in my home country of India and other tropical regions in Southern and Southeastern Asia as well as South America.  It is delicious, relatively cheap and is often a hygienic alternative to plain water, since it is drunk directly out of its tender coconut shell.  It is often prescribed as an adjunct therapy for dehydration due to gastroenteritis, and there are even sporadic reports in the literature of its use as a short term intravenous hydration agent, when medical saline is unavailable1.  Apart from these medical uses, it is also ubiquitous on the streets and beaches of western and southern India, where after people enjoy the cool coconut water itself, the coconut-vendor splits open the coconut and scrapes out the sweet translucent coconut flesh, which is particularly enjoyed by children. 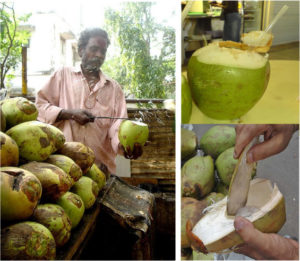 Picture 1: A coconut vendor in southern India, a tender coconut ready to drink, and the flesh of a young coconut being scraped with a piece of the husk.

Cocos Nucifera, belonging to the palm family (Arecaceae) has long been cultivated in the tropics due to the multitude of uses for different parts of the tree.  Everything from the leaves to the outer husk of the coconut is used in the production of decorative as well as utilitarian items.  When the coconut is young, the outer husk is a light green in color and is quite easy to pierce with a sharp knife.  Coconut water is the clear liquid found in the center of a young coconut.  (This is not to be confused with coconut milk, which is, well, milky in color and made by grinding and squeezing the flesh of a much older coconut.)  Depending on soil conditions, coconut water ranges from very sweet to neutral to even slightly acidic in taste.  This is probably why the Brazilian coconut water I purchase here does not taste exactly like the Indian coconut water I grew up with, but it still evokes memories in my mind of balmy evenings spent chasing waves on the beaches of Bombay.

Nutritionally speaking, coconut water is a superstar of hydration.  It is naturally fat free and low in sugars.  According to various nutrition labels, a cup of coconut water contains about 10 g of natural sugars contributing upto 45 calories.  It also contains 600-680 mg of potassium (12%-14% of daily value), 40-60 mg of sodium (2%-3% of daily limit) and upto 6% and 10% of your daily calcium and magnesium needs, respectively.   Sports drinks generally contain a lot more added sugars, very little potassium, almost no calcium or magnesium, but a lot more sodium, which is the main electrolyte lost during intense physical activity.  So, while coconut water may not make the ideal sports drink on its own, combine it with a handful of salted pretzels, and you’re good to go.  Not only does it have a many more beneficial electrolytes, it is also free of the various preservatives and food colorings that are added to the glow-in-the-dark colored sports drinks that are on the market.  There are many different brands of packaged coconut water available in the US market these days.  They generally come in cans (which I find impart an unpleasant aftertaste to the water itself) or in tetra-paks, which, in my opinion, house a much better product.  While some products do contain extraneous ingredients, there are several which list simply coconut water as the only ingredient.  So perhaps the next time you are considering the beverages in your store, pick up a packet of coconut water and as you sip this refreshing drink, you too may be instantly transported to a sunny golden beach with the warm waters of the ocean gently lapping at your toes.