Interview with Sharon Donovan, Ph.D., R.D., Professor and Melissa M. Noel Endowed Chair in Nutrition and Health in the Division of Nutritional Sciences at the University of Illinois and Past President of the American Society for Nutrition. 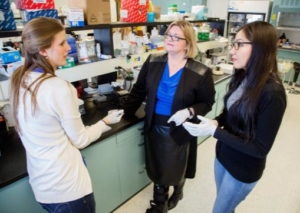 Dr. Donovan received her Ph.D. in Nutrition from the University of California, Davis and completed a post-doctoral fellowship in Pediatric Endocrinology at Stanford University School of Medicine. She joined the University of Illinois, Urbana in 1991, where she became Professor in 2001 and in 2003 she was named the first recipient of the Melissa M. Noel Endowed Chair in Nutrition and Health. She served as Director of the Division of Nutritional Sciences Interdisciplinary Graduate Program from 1999-2009. Dr. Donovan served as President of the American Society for Nutrition for 2011-2012. She is also President-Elect of the International Society for Research on Human Milk and Lactation (ISRHML) and she continues to provide leadership and guidance in several committees and special initiatives for ASN. In October 2017, she was elected to National Academy of Medicine.

How did you first get involved in nutrition research? What made you interested in the field of nutrition science?

I was an undergraduate student at U.C. Davis majoring in Zoology, with the intention of going to veterinary school. In my junior year, I took a physiological chemistry course (basically nutritional biochemistry) taught by Richard Freedland—and I loved the course! Afterward, I took a nutrition course in the Department of Nutrition, where Bo Lönnerdal was a guest lecturer on the topic of pediatric nutrition—and I was hooked! I switched my major to nutrition science and started doing research in his laboratory and eventually was accepted into his laboratory for my doctoral degree.

When and why did you first join ASN? What convinced you to join the organization?

I joined the former AIN in 1984 as a graduate student in nutrition at U.C. Davis and attended my first FASEB meeting in 1985. I became a Full Member in 1989. I joined because the American Society for Nutrition is the top nutrition society for basic, translational and applied research in nutrition.

What aspects of ASN membership have you found most useful, professionally? What other aspects of your membership do you find useful as your career has progressed?

ASN membership has been instrumental throughout my career. Early on, ASN provided a framework for disseminating my research through annual meetings and publications. Likewise, through ASN I was able to build a broad professional network of colleagues at other institutions in the U.S. and around the world. ASN also provided numerous leadership opportunities through the RIS groups, on the Executive Board as Councilor and Secretary and, eventually, as President of the Society. All of these activities have been very professionally fulfilling for me.

What aspects of your research do you foresee being most important for ASN members?

My laboratory conducts basic and translational research in the area of pediatric nutrition. During this phase of life, proper nutrition is of key importance for growth, development and long-term functional outcomes, such as cognition and immune response. A large focus in my lab is how early life events influence the composition and functional capacity of the gut microbiome. As we learn more about the microbiome and its relationship with many of the same diseases that have long been associated with dietary intake, it is clear that nutrition researchers should know more about this newly appreciated “organ”.

Can you tell us more about your current position and the research activities in which you are involved?

I am a Professor in the Department of Food Science and Human Nutrition and am affiliated with the Division of Nutritional Sciences and the Department of Pediatrics. Currently, my collaborators and I are investigating dietary approaches to improve the structural and functional development of the intestine and the brain, and the development of gut microbiome and the gut-brain-microbiome axis. In addition, I enjoy engaging with researchers in other fields to conduct transdisciplinary research focused on ways to prevent childhood obesity and picky eating behaviors and to reduce the severity of symptoms in children with autism.

What do you feel are the biggest challenges facing nutrition researchers today? Are there any areas where you would like to see more research?

Obviously, research funding continues to be a challenge for researchers in all areas. However, given the importance of nutrition in health and chronic disease prevention, I believe that there are many opportunities for nutrition researchers for interdisciplinary collaborations, which can be very attractive for funding agencies. In my opinion, more research is needed in understanding the contribution of the individual to interactions with diet and other environmental factors. For example, what role are host genetics and epigenetics genetics playing in responses to diet? This has been a hot area of research for a decade, but has not been fully translated to clinical medicine. Similarly, we need to know a lot more about the host aspect of host-microbe interactions, if we are going to tease out the role that the microbiome plays in health and disease.

Is there anything else you’d like to tell ASN members, especially students and postdocs?

I encourage everyone to take the opportunity to get involved in ASN. There are opportunities to “dip your toe” in the water and see how you like it! The RIS’s and other membership engagement groups, such as the Student Interest Group and the Postdoc/Early Career Nutrition Interest Group are great places to get involved. Networking is critical, particularly at earlier stages of your career, and professional contacts made through networking can help open doors that lead to opportunities, including internships, postdocs and jobs. Later in your career, being known by your colleagues can help with getting letters of P&T or learning about new positions in industry.